When Omar Yeefoon opened Shoals Sound & Service in 2017, he brought Deep Ellum excellently executed cocktails in a snazzy but comfortable environment, complete with records playing over the speakers.

The spot was praised for the bar program, as well as an incredible bologna sandwich:

“This sandwich, which comes with either a half-pound or a pound of bologna (trust me, even if you’re splitting it, you only need the half-pound), is piled high with thin-sliced mortadella, peppers, mustard, mayo and several glorious cheeses between a fresh bolillo bun.

It’s messy, it’s juicy, it’s creamy and salty — all the things a bar snack should be. If you’ve had one too many bloody marys at Shoals, this is the best way to soak up all that vodka.” — Dallas Observer, 2017

These days, though, you’ll find more than the list of classic cocktails, with a changing drink of the week and anything the expert behind the bar can create. The big difference, though, is the Latin American food coming out of the tiny kitchen at the back of the dining room: It’s now all vegan, a switch Yeefoon made during the pandemic.

Find empanadas with fillings such as curried chickpea or mushroom and lentil picadillo. Crunchy, flaky, Argentine-style pies have these savory fillings that pair well with a cocktail. You can also get an arepa with Beyond meat, a corn patty or smoked jaca pineapple. 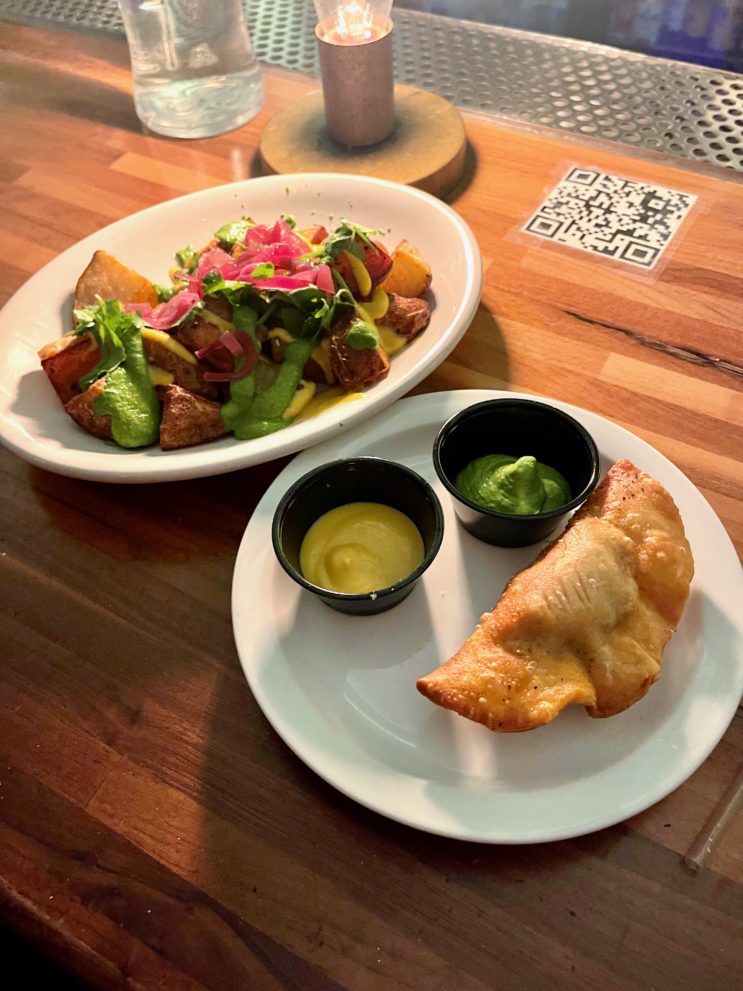 Latin-fried potatoes and a curried chickpea empanada at Shoals

Latin-fried potatoes with pickled onion, chimichurri and Peruvian aji are a lovely plate to share, and the colorful shiitake ceviche will make you rethink the dish: a chilled blend of seared shiitake mushrooms top cucumber, cherry tomato, fresh jalapeño, radish, mango, avocado and shaved onion and is served with crispy plantain chips.

If one has apprehension toward all-vegan foods, Shoals can make you change your mind.