Business of the Week: Weed Spot Opens to Change Narrative on CBD

A month ago, you may have noticed the exterior of a storefront on Commerce Street being painted a bright green. It was a vibrant jolt that was hard to miss, paving the way for a sign hanging above its door reading, “The Weed Spot.” 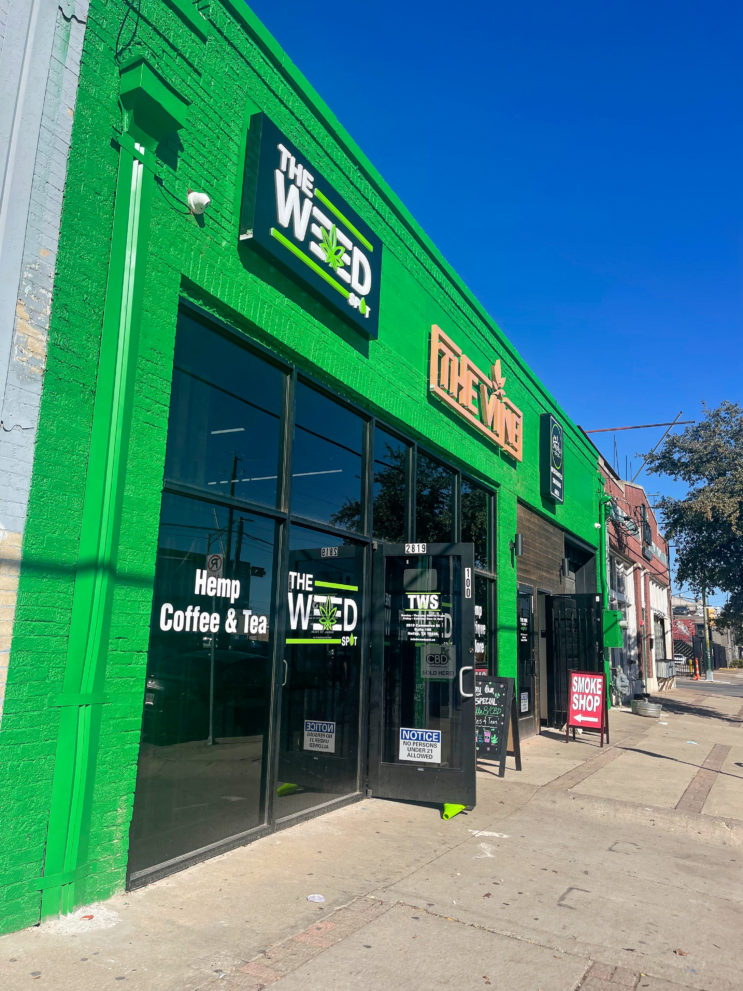 “The party or the recreational aspects of it, that’s not what our store is about. Our focus really is the medicine of it all,” says Watson, who has a doctorate in public health.

This is the second store for The Weed Spot, with the first being on North Madison Avenue in Bishop Arts.

“Honestly, I wanted to be in deep Ellum … I found someone who leased to me in BA and it kind of took off.” she says.

Customers range from ultra-conservative to ultra-liberal with everything in between, Watson says, including all racial groups, all ethnicities.

“What we’ve learned in this time is there’s no one person that shops with us,” she says. “I don’t want people who are shopping with us to get anything other than the purist products, so we test everything for solvents, heavy metals, toxins, everything. They’re getting the highest quality of the plant, which I think is one reason we’re successful, is that we’re consistently above whatever the quality standards are.”

There’s coffee and tea — to buy to make at home or to walk out with a beverage — because Watson not only loves the drinks, but finds it to be a more approachable entry for CBD use.

“I know what people think because I used to be one of those people,” she says.

Watson grew up hearing cannabis was bad, and she carried that through adulthood. What started shifting her mind-set, she says, is when she was looking for holistic alternatives for her son, who has autism.

He was prescribed medicine that Watson says changed who he was. She went down the rabbit hole of CBD and put him on a broad spectrum (which doesn’t have TCH) that she says helps. But the catalyst from use to advocating for CBD was her nephew.

“As I got my son kind of adapted to a CBD regimen, my nephew was using Xanax. He had severe anxiety, and I was like, ‘Julien’s been using CBD gummies … if you’re scared kind of, you can do a broad spectrum,’” she said, explaining her research on how it could help. “He had a frown on his face, like. ‘I would never do that.’ Two weeks later, he died of a Xanax and Percocet overdose.”

Watson herself fell deeper into anxiety and was prescribed anti-anxiety medicine until she realized she developed a dependency on it. At this point, Watson was operating a clinic for alcohol and chemical dependency, and the irony wasn’t lost at her.

“And you know what I never had anyone come in for? Cannabis,” she says.

She explored opening a store after the 2018 Farm Bill made CBD legal — specifically, hemp with no more than 0.3% of TCH (the compound found in cannabis that creates that high effect). While searching for a name such as Everyday CBD and the like, she was having her sod redone in her yard because weeds kept popping up. Even after the sod, they had to keep working to keep the weeds out.

“Everyone thinks the word ‘weed’ is a bad thing. You know what it means? A plant that grows and thrives in places that it’s not wanted. Is that not the story of cannabis?” she says. “I knew naming it this, it was going to attract a lot of attention, but I think my hope was that people would start asking questions and they would be curious, and when they walk in, it’s not going to be like anything they thought, so that way we can start conversations.”

Watson’s staff is knowledgeable and trained so they can answer questions and guide a customer through what various labels mean. Some things are intended to calm anxiety or help sleep, other things are aimed at helping improve focus.

“I prefer to change the narrative on how things are done,” she says. “I’m here because I really believe in this, and the customer base has shown me what our presence has meant.”